Do you like classic slots which were modernised from their physical form into the digital one? Or do you like the classics but remade and maybe with an extra function? It's exactly these slots that are made by the Aristocrat company. A familiar user interface, unforgettable sounds and graphics which, in spite of its simplicity, serves its purpose well enough, those are slots which are offered by the Aristocrat developer, being popular all around the world.

When people say Aristocrat, many know exactly what brand it is and that's no wonder. It is undoubtedly one of the most significant providers of video slots and it boasts being active for 60 years. Aristocrat provides the gamers with a large variety of slots from the most basic ones, which, despite their age, still offer a fun experience, till the newest ones which have also been innovated a bit. For years, players all around the world have been enjoying its atemporal design and gaming options which will utterly grab you and never let you go. As well as any other company producing online slots, Aristocrat also has its so-called hallmark. It is something with which the game shows clearly, which workshop it comes from and it helps the player get used to a new slot. It can be a special game attribute, the style of the user interface or, as it is by Aristocrat, bold script fonts and colourful graphics.

As was mentioned above, the company is known for its timeless games which involve pleasant graphics as well as brilliant gameplay. Now we're going to introduce two of them and make a brief outline about what we can expect from the Aristocrat slots. The classic among classics would surely be the 'Big Ben' game and another one, which doesn't need to be shy about its popularity, not even the slightest, is 'Choy Sun Doa' which, concerning popularity, is only few steps behind its London rival.

Wild bonus symbols as well as winnings in every spin

The main attraction of this slot is its unbelievably enormous jackpot which can be spinned every round and, at the time of its release, knew no equal. Another game enlivening happens when the symbol of London guards appears on the reel. This works as wild card and simultaneously as wild multiplier. Every winning combination, which is the part of it, gets doubled, which makes it a very welcomed symbol. As with every proper slot game, Big Ben doesn't go without its scatter symbol either, which is, in this case, the Big Ben itself. 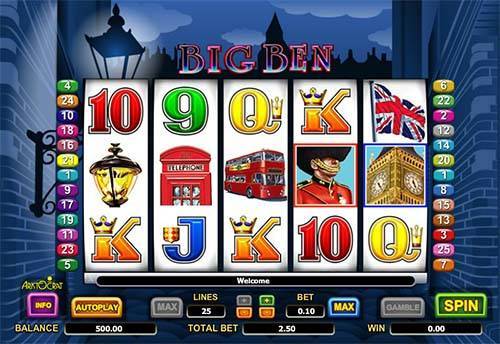 What makes Choy Sun Doa such an attractive slot is its '243 Ways to Win' system, which gets rid of the classic winning combination. This gets replaced by a special system of wins which are determined by the percentage of the surrounding symbols.

The topic is again set up in Orient and the whole game is in accord with it. The oriental elements can be found in many places, from the logo till the symbols themselves, where there appear for example the golden dragon or the emperor which symbolises the highest winnings.

Why play slots by Aristocrat

Aristocrat uses a so-called 'instant play' game format, through which it enables an immediate game and that is, in fact, from anywhere. You can play from home or anywhere on your travels using the app for mobile devices. In the game offer, there is also plenty of Vegas slots which pull you directly into the atmosphere of classic casinos. The user interface is easy but well enough and as far as graphics are concerned, the games are not among the top, but still, they are very catchy.

If you haven't decided yet, not even until this point, if you will give the chance to Aristocrat slots, maybe this summary of advantages will help you:

We wish you a pleasant gaming experience.

Casinos with the developer Aristocrat

Casinos with the developer Aristocrat