Poker face, Texas Hold'em, Omaha, call, check, fold ... anything you say, but you do not have the courage to venture into the game in a real casino? Does not matter. Practise poker in an online poker room. Review the basic rules oprašte winning combinations and go for it.

Right strategy, you can rehearse in our online poker games for free. You might try a popular Poker Pai Gow Poker or Royal. As the game goes, it is just for you. The main thing is that they really learn the rules and winning combinations. In addition to playing casino machines for free and then try poker online with us and obehrajte dealer.

The birth and origin of poker games

Poker, a card game for two up to ten players, probably has its origin in the Persian As Nas card game, which was brought to Europe by French sailors. The French game Poque then got back to American Louisiana and the word 'poker' appeared in the year 1800.

The origin is draw poker, from which a thousand other types of poker were developed. Nowadays, the best-known and the most popular is Texas Hold'em Poker, which was came into existence in the 19th century's 20s. The second popular one is Omaha.

The list of the most frequently played poker types, which you can come across in online casinos:

By online poker, you don't need to have a perfect poker face and not even a full wallet. Start to play free poker in online casinos, you can build up the courage to play for money later. Poker rooms can be found in almost every casino online. And if you aren't successful at it, try for instance roulette.

Poker is not a typical game of chance, although it might be ranked among them. Poker is mainly about tactics, strong nerve and a knowledge of starting, or rather the winning combinations. These are the fundamental part of the game. Your task is to put together a better combination than your opponents. There is another way to win, that is, when all other players fold their cards and don't want to continue playing. 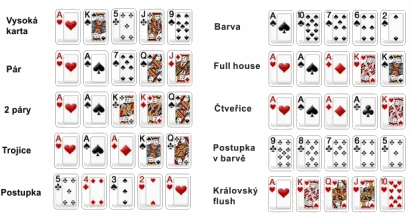 You can play poker in the form of cash game, where you "bring" a certain sum of money in tokens (Buy-in) and you try to win as many tokens as possible from your opponents. Or, you can take part in a tournament, where a certain number of players win the money - the players who stay in the game for the longest time. You can play free poker tournaments (freerolls), or for an entrance deposit (Buy-in).

First, the dealer is determined (marked with a white token), whose dealer role moves by one position forward in every new round. Two players on the dealer's left have to bet Small blind and Big blind one by one. These bets are obligatory.

There follows the process of handing out the cards. Some of them are handed out to the players, others are laid on the table, it depends on the game type. Everybody who wants to participate must make a bet (call). The player on the left from Big blind starts first. When the rest of the cards are laid out and all the bet rounds are over, the player with the highest game combination wins - if the rules don't say otherwise.

Strategy to win in poker

Even poker has its game strategies. It is recommended to the beginners to make use of the position at the table (Position strategy). Another strategy, Tight is right, advises, what cards are recommended to be dropped immediately. The trick Never slowplay, on the other hand, advises to bet when having a good starting combination. Another strategy tells you how to play before the flop and after it (Preflop play, Postflop play). These strategies go mainly for cash game. There are also other strategies used in tournaments.

The foundation stone of every game, however, are the starting card combinations. You can read more about them here.