A group of players with the number 21 stuck firmly in their minds are trying to beat the croupier with their card combination at a semi-circular table. Hated by the casinos, adored by the players, it is one of the most popular card games in the world - BlackJack, a game which we will introduce right now.

The name changed, the rules did not

The predecessor to BlackJack, which is popular in casinos all over the world, is a French card game vingt-et-un ('twenty-one'), played as early as around the year 1700. There also exists a very popular variety of BlackJack called Twenty-One, played with Marriage cards, which don't differ much from the original game speaking about the rules, except maybe for a different terminology and slight differences in counting the values.

BlackJack Live offers everything you would expect from playing in a real casino, including a live croupier, that all from your home or anywhere else using your mobile phone at any day or night time. The bonuses related to internet gaming are very interesting and the excitement from the game is almost the same as at a real table, but the most important fact is that you get a higher chance to win in an online casino than in a real one.

If BlackJack live didn't catch your eye but you still want to experience the atmosphere of an online casino, try out, for example, Texas Hold'em Live, which offers very similar advantages and gives new game experiences.

The basic principle of the game BlackJack Live is to have the total value of your cards closer to the value of 21 than the croupier has, and at the same time it's important not to exceed the number 21. At the beginning of every round, a player gets two cards which are turned face up, with the possibility to get more cards from the croupier (this option is only up to the player, not to the croupier). The progress goes this way in every next round.

Furthermore, there are a few steps a player can make based on their chosen strategy. You can find all the options here.

The winner is the player who has a higher total than the croupier in the end, while not having exceeded the value of 21. The player with the value higher than 21 is 'over' and loses authomatically.

The cards from 2 to 10 have the same value which is given on the cards, the cards J, Q, K (jack, queen and king) have the value of 10. The ace (A) can be counted by your own will as 1 or 11. The card colours don't matter. If the player has an ace counted as 11 points, the total is called 'soft-hand' because when receiving the next card, the player can never be 'over'. If not, the total is called 'hard-hand' (e. g. soft-hand 16 or hard-hand 17).

The strategy to win in BlackJack Live

As with any other card game, BlackJack has a lot of strategies for success. With the help of the table enclosed, we will show you the most basic strategy. The table is a summary of recommendations, how to play depending on the actual combination of the holder's and dealer's cards. The enormous advantage goes to the players who are experienced in the classic BlackJack, because its Live versions are not different from the classic ones at all. 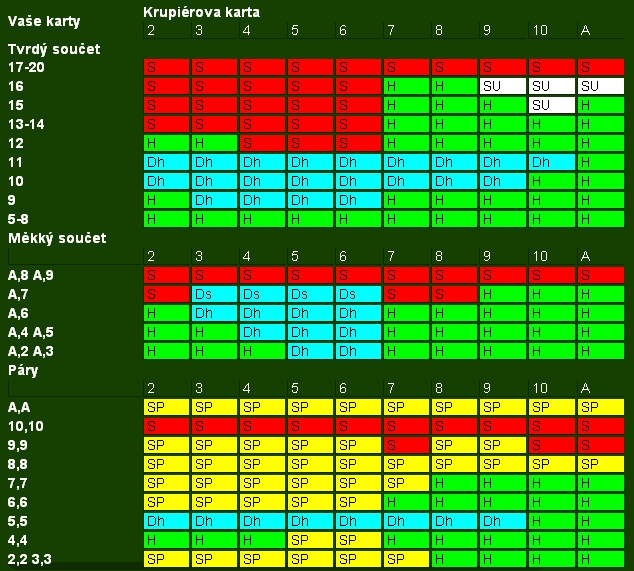 Dh = double (if not allowed, then hit) - double the hit

Ds = double (if not allowed, then stand)

SU = ensurance (if not allowed, then hit)

Another very popular strategy which is regarded with displeasure by the casino owners because it's on the verge of cheating, is counting the cards. The win is then on the player's side, after each card received from the deck of cards. The basic principle is that the player is perfectly aware about which card has already been played with, and that way he can presume, based on probability, which card may come next. He works with this information and based on this, he adjusts the stake for his profit.

There are, logically, a lot more strategies than those written above, and here you can find some of them.