Nowadays, Craps is played by millions of people all around the world, mainly thanks to lightning-like quickness and a pleasantly tense atmosphere which follows every roll. Get more familiar with the world of Craps and try your luck using two dice.

A long way towards perfection

Craps were created by simplifying the original English game named Hazard which has its roots in crusades and which was later influenced by French gamblers. The one who gave the game its modern American version in which we know it nowadays, was a gambler and a politician Bernard Xavier when he first introduced the game in New Orleans. Nevertheless, there was a mistake in the game which enabled to rip off the casino and which was later fixed by an American John H. Winn by introducing a "don't pass" bet option. After this step being made, the Craps haven't changed since and this version had been played till the modern times.

The game is usually played in two versions - American and British. Except for minor differences in terminology, the only major difference is that the British version offers better betting ratios and that some disadvantageous bets are banned entirely. The dice game is popular mainly in North America but it also has its fans all around the world.

There's a reason why Craps is one of the most popular games in casinos and that is because of its social character and entertaining briskness. Nowadays, you have the opportunity to experience this atmoshere on your own and that is, from your home or anywhere on travels, using your mobile device. Discover great bonuses which are offered by the online casinos and become, thanks to higher chances to win, a winner of large sums of money which online gaming brings.

If you've found out that Craps isn't your cup of tea, try choosing one of the card games like poker online or BlackJack.

The rules of Craps

Craps can appear as an extremely difficult game when it comes to learning. To understand even the easiest principles may seem very demanding, however, it is not even remotely so toilsome.

Craps are played in rounds and if, in the first round, the total is 7 or 11, we mark it as a win or natural. If the total equals 2, 3 or 12, the round is called Craps and it ends immediately. If it happens that any other total has been rolled, then this roll becomes the aim and dice are rolled until this total is reached or until there is a total of 7, after which the player drops out. The dice are rolled around the total of seven for a simple reason. 7 can be reached by more means, to be precise, by six of them.

The basic bets in Craps - Pass Line, Don't Pass Line, Come, Don't Come - are marked as bets on the line. In some casinos, mainly in Britain, these bets known as Win Line and Don't Win Line, their core is, in fact, still the same. If the player decides to roll, they must wager either on Pass Line or on Don't Pass Line.

The bet on Pass Line is the best-known one in Craps. It is done by placing the tokens on the spot marked as Pass Line on the game table. The bet on Pass Line wins immediately if the total of 7 or 11 is reached in the first roll (win, natural) and loses when it's 2, 3 or 12 (craps).

If any other total drops (other than 7, 11 or 2, 3, 12), it becomes the aimed number (point). The bets are moved from Pass Line onto the number given on the game table. The purpose of the bet is now to reach this total (point) before the seven drops.

The bet on Don't Pass Line is an opposite to the bet on Pass Line. The bets are lost if the total of the first roll is 7 or 11 and are won when the total is 2 or 3 and if the total is 12, then it's a tie. If it comes to the last option, the bets stay in place and it's the next roll which decides their destiny.

The bet on Come has almost the same attributes as the bet on Pass Line. The only difference is that this bet is placed no sooner than after the first roll.

The bet on Don't Come is similar to Come in the way that it's wagered no sooner than after the first roll when the player had decided on their number (point) and the game principle is the same as by the bet on Don't Pass Line.

Try the strategies given above entirely for free here. 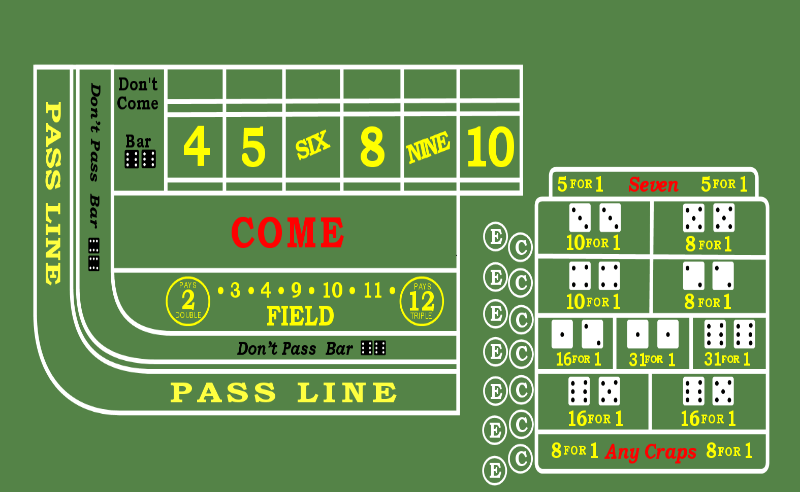