Do you like online roulette? Do you want to know all of its variants? Then you mustn't forget its American version. How it differs from the classic European one and what its rules are can be found on the following lines. Go on reading.

If you know the history of roulette, you won't be surprised at the fact that its original version was with no zero. The first zero was added in year 1843 and the European, or rather the French version of this popular casino game, was created. At the beginning of the 19th century, there came a new, 38th, green pocket on the roulette wheel. And on it, there were two zeroes next to each other. The so-called double zero is mostly placed opposite the one-zero pocket. This is how the American Roulette was created. 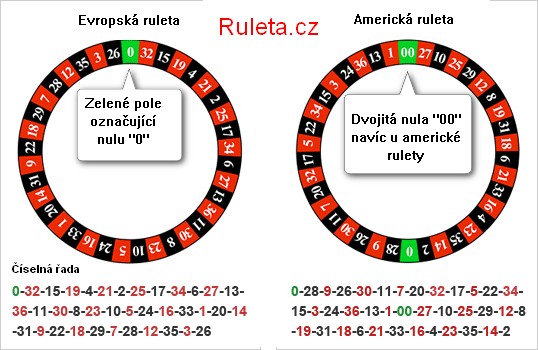 The zero was added to the roulette so that the casinos have a higher chance to win. That way, when it comes to American Roulette, the casino has a higher percent chance to rip you off. To say it precisely, the chance is as high as 2,63% (1,35% by the European Roulette) by the straight bets. But don't worry, it's not so often for the double zero to drop and the advantage for the casino cannot be seen until you have played for a longer time.

The basic bet system is the same in American Roulette as in the European roulette. The double zero, however, gives us further bet options. For example, you can wager on five numbers (0, 00, 1, 2, 3). Although this bet is rather disadvantageous for the player - it is paied out according to 6:1 - you still don't know when the luck will be on your side.

In conclusion to American Roulette

First, try to play free American Roulette in draft. After you get more familiar with the system, you can start playing for money. And if you, by chance, weren't interested in it, try other casino games.

The rules of American Roulette are, in fact, the same as the rules of the European version. Choose a value and a number of tokens to be wagered on a pocket which will be, according to your estimate, filled by the roulette ball. Moreover, you can wager on double zero (00) and five numbers written above.

Strategy to win in roulette online

If you want to make your chance higher, try out some of the strategic bet systems. Let's revive these in short: Parlay (pyramid betting on one colour or group of numbers), Martingale (betting on one colour, doubling the bet amount on the same colour after losing) and The memory game (betting on numbers that haven't dropped in the last three rounds).